JFGO set to receive security funding from the state 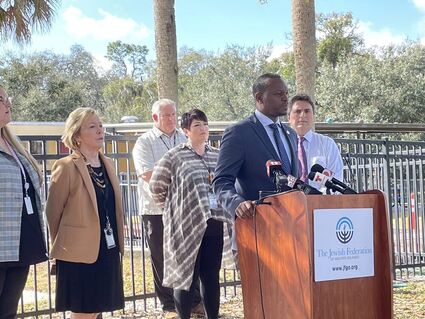 Senator Randolph Bracy (D-Ocoee) at the podium and Keith Dvorchik to his right.

At an in-person briefing, State Senator Randolph Bracy announced that the Jewish Federation of Greater Orlando will receive $150,000 in state funds to secure a new security system for the campus.

The in-person meeting came a week after two groups of neo-Nazis rallied in Orlando. One of the groups, the Goyim Defense League, protested outside the JCC campus about a year ago. This time the group was near the UCF campus and stood on a bridge on I-4.

"Those kinds of demonstrations are despicable and disgusting," Bracy said at the meeting. "... it should be a hate crime."