'Never again,' for the Uyghurs: Jews around the world ramp up China protests as Beijing Olympics start 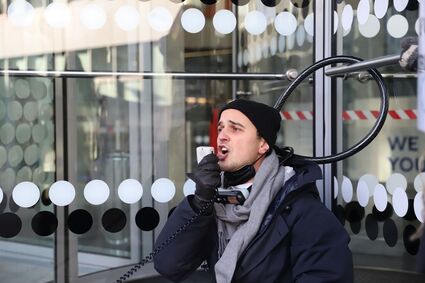 BERLIN (JTA) - On a recent Friday afternoon, with the Beijing Olympic Games only three weeks away, Mischa Ushakov and Padma Wangyal chained themselves to the entrance of the Allianz insurance giant's headquarters in Germany's capital.

They had two demands: that Allianz "drop their sponsorship of the games in China and comment on the human rights abuses of the Chinese government," Ushakov said.

"We gave them a one week deadline," he added.

Ushakov, 23, is a cofounder with Bini Guttmann of Never Again Right Now, a two-year-old Jewish group dedicated to raising awareness about China's persec...