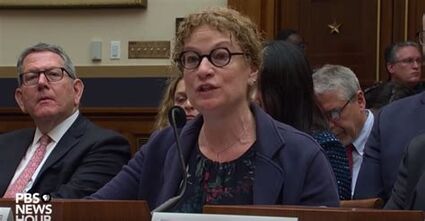 Obama's career of political activism began in some ways when he met Eileen Hershenov. He graduated from Columbia University, and as David Remnick put it, "got it into his head to become a community organizer." After a brief stint working for a living, he answered an ad and joined Ralph Nader's left-wing New York Public Interest Research Group.

His supervisor at the time, Eileen Hershenov, describes having "some really engaged conversations about models of organizing." After a year, Hershenov pleaded with him to stay, "I asked him if it would help if I got on my knees and begged - and so I did," but Obama moved on.

So did Hershenov who went on to become the general counsel for the Open Society Foundations, serving "as chief legal officer for one of the nation's largest private foundations and for the global network of 40 foreign affiliates founded by financier/philanthropist George Soros."

Hacked emails from the Open Society Foundations show that it bragged of its successes in "challenging Israel's racist and anti-democratic policies" in international forums. By then Hershenov was no longer affiliated with the Soros network, but she appears to be unrepentant.

These days, she "oversees" the ADL's "policy, program and civil rights work" as the former Jewish organization's senior vice president for democracy initiatives. Hershenov was a recent hire who was brought on board during the Jonathan Greenblatt era. Greenblatt was a veteran of the Obama administration who has been accused of jettisoning its focus on the Jewish community and Israel in favor of playing the identity politics of the Left.

No single executive may embody the new ADL better than Hershenov who mentored Obama when he was just starting out and proudly worked for George Soros.

"I think I never really understood before as well as I do now that the fight for an open society will never ever end. Kudos to my former boss, George Soros," she recently declared.

Now, Hershenov "oversees ADL's civil rights team, its government relations and community engagement team, the Silicon Valley-based Center for Technology and Society" as well as "the Civil Society Fellowship (a partnership of ADL and the Aspen Institute)."

The Aspen Institute has received significant support from Soros. The Center for Technology and Society is funded by Pierre Omidyar, the Franco-Persian eBay founder who also funds The Intercept which regularly gushes defenses for antisemitism and terrorism against Israel.

The ADL's Center of Technology and Society board of tech experts include Eli Pariser, the board president of MoveOn and a co-founder of Avaaz, which is also Soros backed, promoted BDS and teamed up with JVP: an anti-Israel hate group that hosted a murderous terrorist, and an anti-Israel activist who claimed that Jews drank Christian blood and republished a bizarre claim that "the Zionists who created Israel and still run it are descended from the Khazars."

This is the sort of thing that any Jewish organization or any civil rights group concerned with antisemitism ought to be condemning, instead of collaborating with and rewarding.

But the old ADL, flawed as it was, is largely defunct. Like so much of the old liberal institutional infrastructure, it's being sucked into the black hole money machines of billionaire activists like Soros and Omidyar who have destroyed liberalism and replaced it with their politics.

It's why Hershenov, who boasts of working for Soros, a lead funder of anti-Israel groups, who has blamed antisemitism on Jews, is now in a key position at a group fighting antisemitism.

At least on paper. The ADL spends more time on everything else, including defending Soros.

"If your favorite politician is attacking George Soros," Jonathan Greenblatt, the ADL boss warned at the former Jewish group's Never is Now 2018 conference, "you must stand up and tell them to stop. And do so even if they profess love for Israel up and down."

Once upon a time the ADL had condemned Soros' antisemitism. When Soros blamed antisemitism on Jews, Abe Foxman, the ADL's former leader, had denounced Soros' comments as "absolutely obscene."

But at the new ADL, you are expected to pledge allegiance to Soros and to place him above the Jewish community or the Jewish state. The ADL has more pages defending Soros than it does defending Jewish students facing leftist and Islamist antisemitism on college campuses.

Greenblatt, the head of the ADL, had come through the Aspen Institute where he founded the Impact Economy Initiative. Soros is an Aspen backer, but the specific initiative was backed by the Rockefeller Foundation. Greenblatt's wife, Marjan Keypour Greenblatt, is a non-resident scholar at the Middle East Institute which used to be a centerpiece of the Arab Lobby's anti-Israel push.

It's unsurprising that Greenblatt and his allies are remaking the ADL into just another of the interchangeable leftist groups looking for handouts from Soros, Omidyar, the Rockefellers, Buffets, Gates and others that have hijacked and are controlling American politics and society.

Institutional capture is an ongoing process. Greenblatt joined the ADL in 2014. Hershenov came on board in 2018. The recent controversial hiring of Tema Smith as Director of Jewish Outreach, despite tweeting, "Jews have to be ok with Palestinians explaining why some turn to terrorism", and the redefinition of racism to exclude Jews are just the latest in a series of ADL betrayals.

While the ADL bemoans conspiracy theories about Soros (much more so than conspiracy theories about Israel or Jews) there is no denying the fact that what used to be an open society is closing in no small part due to his Open Society networks. Soros is not alone in this regard, he is one of a number of wealthy men of various ethnicities and backgrounds who have managed to centralize public policy through chains of non-profits in much the same way that tech industry monopolies like Amazon and Google have centralized our culture and economy.

What's happening to the ADL is what has happened to countless Jewish, Christian and non-sectarian organizations that were once liberal and are now just leftist fronts. What the Soviet Union failed to accomplish in its infiltrations, two generations of activists backed by powerful and wealthy men have done by turning every liberal group into the same front.

The ACLU no longer believes in free speech, the Sierra Club no longer favors limiting immigration to protect the environment, Planned Parenthood casually tosses aside its founder, and the ADL no longer defends Jewish civil rights. Indeed Hershenov condemned the Supreme Court for intervening in Gov. Cuomo's persecution of Jews and Christians.

The vast majority of former liberal groups all say the same things and have interlinked leaderships. The only difference between them is which side of the street they're working.

The same convoluted road that saw Hershenov and Obama briefly intersect before going through Soros, that saw the top ADL executive work for Soros and then for an Obama administration member is no coincidence. The Left looks big, but it's actually very small. The massive numbers of organizations with their own letterheads, sites, and petitions belie how much money is spent manufacturing these organizational illusions of political scale.

All of this is a massive political potemkin village. The ADL is now just another false front staffed by radicals, detached from its original purpose, and existing only to serve a common agenda of manufacturing the myth that a small leftist elite should be able to speak for all Americans.

Daniel Greenfield, a Shillman Journalism Fellow at the Freedom Center, is an investigative journalist and writer focusing on the radical Left and Islamic terrorism.