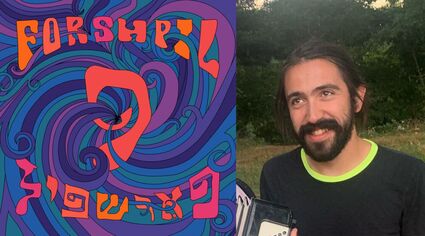 On his hour-long radio program, the 27-year-old plays a wide variety of Jewish recordings - songs from the heyday of Yiddish theater, as well as a mix of contemporary klezmer, Yiddish and Jewish music from around the world.

On Friday, Bendich's label announced their first release: The second album from the band Forshpil, which Bendich describes as "Yiddish psychedelic rock fusion."

Bendich recognizes that people's feelings about Jewish music are rooted in nostalgia - and, so, too, are their feelings about physical albums (records, CDs, cassette tapes). He acknowledges that, at times, it feels like pressure to bring back memories that many listeners never knew they had.

But Bendich tells The New York Jewish Week that he prefers to frame Borscht Beat as continuing a tradition, instead of simply reviving one. "It has helped me feel like I'm not alone in this, I'm not trying to resuscitate something - I'm just participating in culture in the way that people have for a long time," he said.

"Jewish culture, Yiddish culture, and klezmer music is still a living culture," Bendich added. "Of course, with the Holocaust and assimilation, things have changed the way or the amount of the culture that's created, but there's a continuity to it. There was never a gap."

Bendich's lifelong passion for Jewish music is something that's been passed down from generation to generation. His grandfather, Max - who lived in the Bronx and died in December 2020 at age 105 - was a collector of Jewish records, too.

Bendich launched the Borscht Beat radio show from his Bed-Stuy apartment in November 2020, when Vassar College's radio station enlisted alumni to fill open air time. Since then, he has built up a larger community of listeners, and has expanded to three additional radio stations - WJFF Catskill, WVKR Poughkeepsie and WCFA Cape May - all while working his day job for Digital Media Rights, a film distributor in Manhattan.

The weekly hour of Jewish music is still going strong, and Bendich has no plans to stop anytime soon. In recent broadcasts, he's played "More! Sing Along in Yiddish!" by Marv Kurz, an album of classic popular Yiddish and Hebrew songs; interviewed klezmer clarinetist Michael Winograd; and played the songs and monologues of Yiddish theater icon Noah Nachbush - all from his private collection.

"I love pulling stuff from the collection and sharing it with my listeners," he said. "I love that I'm bringing music to people's lives that they heard long ago and haven't heard since in many cases."

The success of the Borscht Beat radio program - which, he said, has garnered hundreds of emails from fans and dozens of calls from listeners - helped give him confidence that a new Jewish record label could be a success. Bendich also experienced, first-hand, the unwavering enthusiasm among New York's klezmer community throughout the pandemic: During the long months of quarantine, Bendich attended many high-energy outdoor klezmer concerts, and even a 24-hour long klezmer session on Zoom hosted by Yiddish New York at the end of 2021.

Launching a record label "is sort of the logical next step," Bendich said. "I was interested in finding a way to involve myself more on the active side of what's currently going on in the Jewish music scene, either in the production or the release of music."

After speaking with several friends and musicians, Bendich decided that his label's debut release would be a CD of an album from the Brooklyn-Based multi-instrumentalist Ilya Shneyveys. The two had met at klezmer picnics that Shneyveys hosted in Prospect Park during the height of the pandemic.

The band, Forshpil, is made up of Shneyveys, the instrumental lead, and vocalist Sasha Lurje, both immigrants from Latvia. Forshpil, a Yiddish term generally translated as "prelude," also refers to a type of musical performance that is given for a bride before a wedding. Bendich describes their music as a blend of Old World and New: it's "psychedelic hard rock mixed with folk song mixed with some klezmer elements."

Bendich hopes to work with other Yiddish bands and singers in bringing their music into the world.

"Most music companies won't publish Jewish-specific music unless it's already popular, Jewish record labels that curate a distinct kind of ethnic fare are an absolute necessity," Eddy Portnoy, the academic advisor and exhibitions curator at YIVO, told The New York Jewish Week. "They've been around for a long time and have brought us all kinds of material, from comedy to cantorial, and everything in between."

"Small Jewish record labels launched the careers of popular performers like Allan Sherman and Matisyahu," he added. "We might never have heard of them if not for these independent labels. So it's a good sign of cultural ferment that new ones are popping up."

Jon Madof, the co-founder of record label Chant Records and bandleader of Zion80, a 10-piece outfit that combines Jewish music, Afrobeat and avant-garde jazz, is also hopeful about a new Jewish record label on the scene.

"Even though the new music landscape can be difficult to navigate, I'm sure their artistry and dedication will serve them well as they help to bring Jewish and Yiddish music solidly into the 21st century," he said. (Madof is also the director of technology at 70 Faces Media, The New York Jewish Week's parent company.)

The Forshpil CD is being released with a 24-page booklet that will include lyrics in the original Yiddish, transliterations and English translations. The psychedelic artwork is by Avia Moore; Michael Wex, author of "Born To Kvetch: Yiddish Language and Culture in All of Its Moods" wrote an introductory essay.

Looking ahead, Bendich said he's thrilled that he'll be able to add to the world's collection of Jewish records - something that has been such a huge part of his life.

"Just to imagine that someone someday will be looking for a record at a record store and will come across something that I've released... I love that idea," he said. "It's so exciting. I'm doing it for the sake of ethnic culture, the cultural heritage that I'm so proud of and involved in."

The album is live at https://borschtbeat.bandcamp.com/releases, and Bendich's radio program streams on Sundays at 1 p.m. on Radio Catskill.