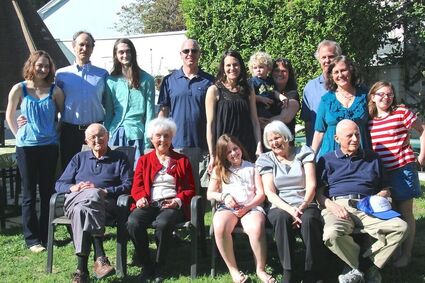 The extended Feldstein family, including Alan and Felice at the bottom right, in an undated photograph.

(JTA) - Felice Jacobs and Alan Feldstein could have tied the knot in Phoenix, where they met and where his mother worked at the local Reform synagogue. Or they could have held their wedding on the U.S. Army base in Austria where Alan was stationed at the time.

Instead, they chose the Eagle's Nest, the Nazis' former mountain retreat in the Bavarian Alps  - a location that, as far as anyone knew, had never before hosted a Jewish wedding.

"We got married there because my husband wanted to thumb his nose at Hitler," Felice Feldstein recalled last week.