'Jackass: Forever' star Rachel Wolfson on being the first Jew and woman on the stunt comedy team 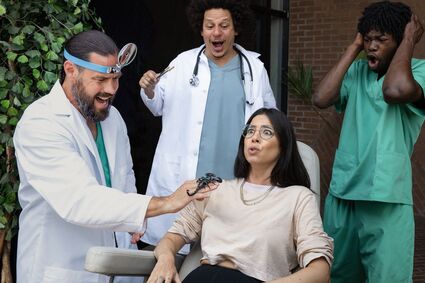 Rachel Wolfson in an uncomfortable scene with, from left, Chris Pontius, Eric Andre, and Eric Manaka - and a scorpion - in "Jackass: Forever."

(JTA) - Most film debuts don't include licking a taser while dressed as a mime, or having a scorpion crawl on one's face. But when it comes to the "Jackass" TV and movie franchise, that's par for the course.

"When I first told them, they were like, have you told your therapist?" Wolfson told the Jewish Telegraphic Agency.