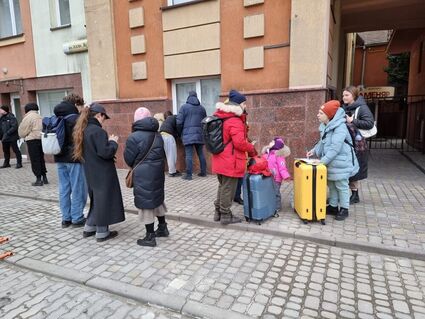 Prospective immigrants to Israel en route from Lviv to the border-crossing with Poland, Feb. 26, 2022.

(JNS) - The Jewish Agency for Israel has opened six aliyah-processing stations at Ukrainian borders, the agency said on Saturday night.

The stations are located in Poland, Moldova, Romania and Hungary, and are being operated through a collaboration with Nativ and Israel's Foreign Ministry.

The ministry asked the agency's emissaries who had been stationed in Lviv to work out of Poland beginning on Saturday. Each day, these emissaries, together with Israel's diplomatic teams, will cross the border into Ukraine to assist individuals who are eligible and interested in immigrating to Israel.

On Saturday, a first group of olim (immigrants to Israel) crossed from Ukraine into Poland with the help of these teams, in what was described in a Jewish Agency release as a "complex [and] nerve-wracking 16-hour process."

The immigrants are being temporarily housed in a hotel near Warsaw, where they will remain until they are flown to Israel.

In general, the Jewish Agency is preparing to provide temporary housing to olim in countries bordering Ukraine until they can make their way to Israel. The housing is being funded through a collaboration with the Jewish Federations of North America and Keren Hayesod.

Aliyah flights and temporary residence in Israel are being funded by the International Fellowship of Christians and Jews and the Israeli Ministry of Aliyah and Integration.