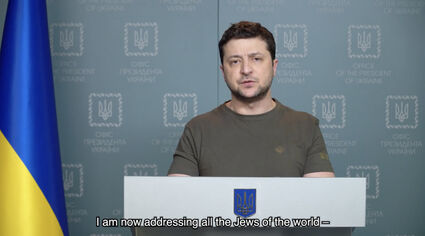 Ukrainian President Volodymyr Zelensky spoke directly to the world's Jews during an address early Wednesday from his bunker in Kyiv.

(JTA) - The morning after Russian bombs fell at the site of a 1941 massacre of Ukrainian Jews, Ukrainian President Volodymyr Zelensky called on the world's Jews to speak out about what is happening in his country.

Russia's attack adjacent to Babyn Yar, the Kyiv site where Nazis and local collaborators executed tens of thousands of Jews during the Holocaust, along with its bombing several days ago of Uman, the Ukrainian city where hundreds of thousands of Jewish pilgrims visit each year, represent an attempt to erase Ukraine's history and identity, Zelensky said a speech delivered after anot...