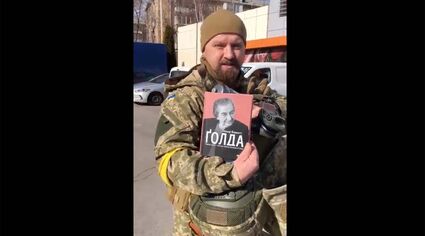 (JTA) - The most prominent Jewish figure in Ukraine right now is the country's president, Volodymyr Zelensky. The runner-up may well be another country's famous Jewish leader.

Golda Meir, the fourth prime minister of Israel and a native of Kyiv whose family fled amid antisemitic violence, has loomed large ever since Russia launched its war on Ukraine late last month. Her words have appeared in pro-Ukrainian memes, been quoted by Ukrainian diplomats and even been pulled from the backpack of a battle-ready Ukrainian soldier.

Almost as soon as the war began, memes riffing on a quote often attr...