Tour unpacks the complexities of life in Judea and Samaria 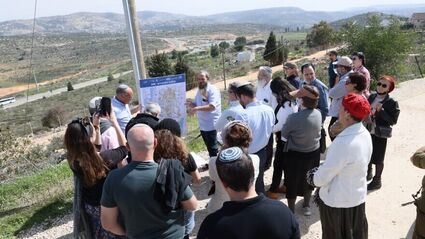 A briefing by Matanya Shapira.

(JNS) - The Sovereignty Movement recently organized a tour of Judea and Samaria for public figures, journalists, social media influencers and others to explore the complexities and dichotomies of life in the region.

The Feb. 23 gathering - under the leadership of Yehudit Katzover and Nadia Matar - focused on explaining the situation on the ground in many areas, including diplomacy, infrastructure, education, environmental issues, employment and quality of life for both Jewish and Arab residents of Judea and Samaria.

The tour was headed by Yigal Dilmoni, CEO of the YESHA Council, which represents the Jewish communities of Judea and Samaria (and formerly Gaza).

On one hand, a visit to a plastics factory in the Barkan Industrial Zone near the city of Ariel revealed how Jews and Arabs were able to coexist daily on the factory floor in order to earn a living and provide for their families.

On the other, a visit to an outlook point in northern Samaria gave insight into the construction of a new road being built to bypass an Arab village - not only for Israeli commuters to reach business districts in the center of the country more quickly, but to allow Jewish motorists to avoid driving through the village, so that they are no longer subjugated to the threat of rock attacks by local Arabs on a regular basis.

During a stop at the Psagot Winery, which has been a leading business entity in the fight against European labeling of Israeli products from Judea and Samaria as "settlement goods" as opposed to "made in Israel," Dr. Mordechai Kedar, a professor at Bar-Ilan University's Begin-Sadat Center for Strategic Studies and an expert on the Middle East and Islamic world, stressed how the Israeli-Palestinian conflict is not just over territory but is a religious conflict where the "Jew" and not just the State of Israel is seen as the enemy.

Kedar said that when he is interviewed or debates on Arabic television networks, he asks if the issue was over the establishment of a Palestinian state. "In the 19 years between 1948-1967, when Judea and Samaria were under the control of the Jordanians, why didn't they establish a Palestinian State for their brothers, as they now demand of Israel since they had so many opportunities to do so during that time period?" he asked.

He explained that the issue isn't just land, and specifically that Muslims have theological issues with the Jewish people starting from the time of the prophet Mohammed until today - a worldview in which Jews are not entitled to equal human rights.

Kedar added that the reason the Abraham Accords succeeded is that they were based exclusively on financial/economic agreements and didn't touch upon religious issues.

He concluded that Israel must assert itself in order to force Muslims to accept that they should sign a temporary peace agreement, and if Israel maintains strength and unity, then one day peace can become permanent.

Back on the bus, Dilmoni discussed how the Palestinian Authority was moving full throttle to implement the 2009 "Fayyad Plan" - the establishment of facts on the ground in strategic areas throughout area C using millions of dollars in European Union funding, in order to create a de facto Palestinian state without negotiations.

Dilmoni said that during the past decade, 75,000 illegal structures have been built in Area C, with an average of five new buildings a day, and that in his opinion the Israeli Civil Administration has been ineffective in combating illegal construction.

The bus then stopped at Wadi Haramiya, where the group saw what initially appeared to be a beautiful flowing stream, but in actuality the unbearable smell came from sewage flowing from a local Palestinian-controlled aluminum factory near Ramallah.

Iche Meir, former CEO of the Samaria Cities' Association for Environmental Quality, told the group that the putrid river is polluting Israel's Mountain Ridge Aquifer, the main source of the country's drinking water, as it also snaked its way down into the streams of the coastal plain below.

Meir said that Israel's attempts to work with the P.A. to find solutions for these types of rampant pollution problems have been met with hostility.

At the same, he criticized the Civil Administration for acting like a "temporary occupying party" that doesn't wish to find long-term solutions. He claimed that the administration's "mentality is based on maintaining peace and quiet. They rationalize that as long as the Palestinian economy is thriving, [Arabs] won't focus on throwing rocks at Israeli cars."

At an outlook point from the community of Kfar Tapuach in northern Samaria, Matanya Shapira, deputy CEO of the YESHA Council, displayed detailed maps of the current road infrastructure projects in the works as well as future plans which will benefit Jews and Arabs alike, as there is a substantial increase in both populations in the area.

He explained that as a result of the Oslo Accords, various roads to bypass Arab villages were planned, including the current Hawara village bypass road. The village suffers from major traffic jams and rock-throwing targeting Israeli cars,

However, Shapira said a master plan for transportation throughout Judea and Samaria was never designed until recently. The plan he said will improve infrastructure on roads, some of which haven't been upgraded since Ottoman times, will decrease traffic and provide easier access to the center of the country.

"We need infrastructure for both populations, so we can all thrive," said Shapira. He said that until now, "the extremists on the left were okay making life miserable for the Arabs in order to harm the 'settlers,' while the extremists on the right would harm the 'settlers' just to make life miserable for the Arabs. Those in the middle realize, you must service both populations."

The group then visited Ariel University's Department of Agriculture to learn about the latest developments in the field of wine production in Israel.

Afterwards, economist Eran Bar-Tal addressed the group in a university conference room, sharing his theory on how the application of sovereignty over Judea and Samaria would benefit the entire country from an economic perspective - especially in the area of housing, as Israel is experiencing a housing shortage and skyrocketing prices.

Finally, it was on to the Lipsky Plastics manufacturing factory in Barkan, which specializes in plumbing equipment. The plant has 110 employees, including 75 Palestinians, along with Israeli Arabs and Jews. Thirty percent of the company's products are exported abroad.

Plant manager Yehuda Cohen stressed that at his facility, Jews and Arabs received comparable salaries and have equal opportunities of advancement. He said that economic cooperation is the true basis for coexistence.

In regard to the BDS movement's promotion of boycotts of products made by Jewish companies in Judea and Samaria, Cohen said, "If we produce quality goods and offer good service, our customers will buy our products. It is the left-wing media which put the BDS on the map...in order to try and harm us here."