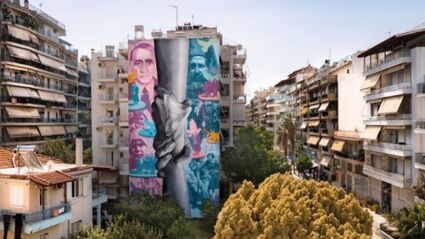 (JNS) - A new street mural in Greece honors two non-Jewish Greek citizens recognized by Yad Vashem as "Righteous Among the Nations" for saving Jews during the Holocaust.

The art display in the city of Patras pays tribute to the late Zakynthos Mayor Lucas Carrer and Greek Orthodox Metropolitan Dimitrios Chrysostomos, who together protected Jewish residents on the Greek island of Zakynthos after the Nazis occupied the territory in 1943.

The project was an initiative of Artists 4 Israel in partnership with the Combat Antisemitism Movement and was painted by Kleomenis Kostopoulos, creative...