The Ukrainian Jew who saved Yiddish music from oblivion 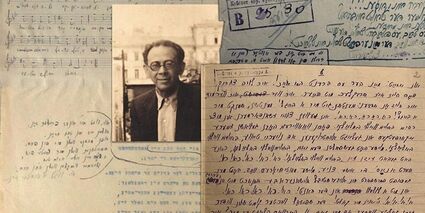 Moyshe Beregovsky is seen with various documents and sheet music collected in his vast archive of Yiddish folk and klezmer songs.

(JTA) - Late last year, months before a Russian missile landed near the Babyn Yar memorial outside of Kyiv, Ukraine, the site's foundation announced plans for a new museum to honor the 33,771 Jews slaughtered there by the Nazis in September 1941.

Natan Sharansky, chair of the memorial's supervisory board, described Babyn Yar as a "symbol of attempts to destroy the memory of the Holocaust," and that the new institution would be called the Museum of the History of Oblivion.

"The History of Oblivion" would make an appropriate alternative title for "Song Searcher," a new documentary about Moysh...