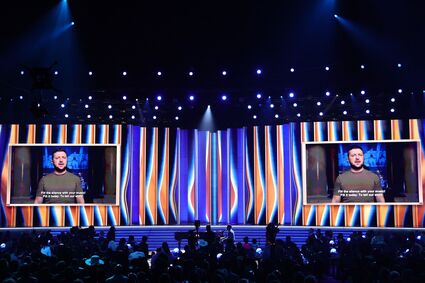 (JTA) - While the Oscars had a moment of silence for Ukraine and various onscreen messages, Sunday night's Grammy Awards went further - with a video address from Ukraine's Jewish president, Volodymyr Zelensky.

"What is more opposite to music? The silence of ruined cities and killed people," he said in the prerecorded video. "Our musicians wear body armor instead of tuxedos.

"They sing to the wounded. In hospitals," he added.

It was a dramatic highlight of the music industry's biggest night and symbolic of Zelensky's rise to a prominent stage in global pop culture.

Here are the Jewish winner...