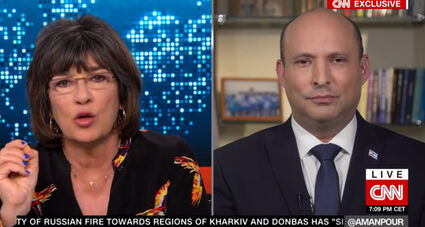 In an interview with CNN anchor Christiane Amanpour about Israel's policies to control violent rioting on the Temple Mount and "settlements" - i.e. Jewish communities - in Judea and Samaria, Prime Minister Naftali Bennett didn't hold back.

Pushing the narrative that stalled peace talks between Israelis and Palestinians are the reason for terror and that both sides are caught in a cycle of violence, Amanpour asked Bennett about his efforts on that front.

After Amanpour insinuated that violence carried out by "Jewish settlers" is a major national security concern on par with Palestinian terror, quoting Bennett and an IDF general's previous remarks on the issue, the premier interrupted her.

"What you've been projecting is blatantly false," Bennett said. "It's a lie, simply a lie."

"No, sir, you cannot say that to me. You cannot tell me I'm lying," replied Amanpour, who appeared taken aback by the confrontation.

"I can," Bennett said. "You're misrepresenting the facts... I said a tiny minority, and I object [to] the symmetry that you're trying to create here."

While violence or vandalism from settlers is unacceptable, it also pales in comparison to deadly Palestinian terror, Bennett said.

"I also object, these are not occupied territories, they're territories in dispute, and we have claims to our own places, as well as them," he stated.

"I get it," the Israeli leader continued. "No one's going anywhere. We have to figure out how to live together. That's my job. To provide security for Israelis, dignity for Palestinians. I'm working on that very hard, and we're succeeding.

"The problem is that the Palestinian leadership is totally corrupt, incompetent, so we have to do the job because there's no one to work with on the other side, and... indeed, we're adding jobs, better jobs, but at the end of the day, my utmost responsibility is to provide security to the Israeli people."