Orlando's Holocaust museum is getting a huge expansion 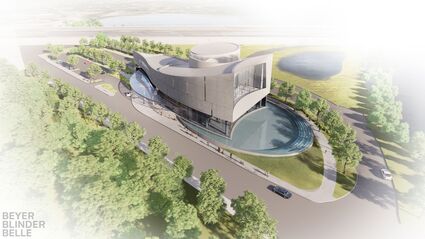 Rendering of the new Holocaust Museum for Hope & Humanity in downtown Orlando.

(JTA) - Situated beside the building that houses the Jewish community center, the Jewish Federation and the Jewish Academy of Orlando lies a tiny, hidden gem of a Holocaust museum.

Despite its small size - a mere 7,000 square feet - the Holocaust Memorial Resource and Education Center of Florida has been a fixture in Central Florida for the last three decades. For Orlandoans who went to middle or high school during that time, there's a high chance they interacted with the museum or its programs at some point.

Established by Holocaust survivor and Orlando resident Tess Wise in the 1980s, the center is now preparing for an expansion and relocation downtown, where it will become part of the city's "Cultural Corridor" and a new neighbor to the area's various art, science and history museums.

The new museum, which will be rebranded as the Holocaust Museum for Hope & Humanity, unveiled architectural renderings of the new space April 13, and announced it will become the latest of 177 locations to contain the entire digital collection of survivor testimony compiled by the USC Shoah Foundation - more than 115,000 hours from 55,000 videos.

This is the first time the USC Shoah Foundation has collaborated with a Holocaust museum to design and implement a permanent museum-wide exhibition, according to a statement from the museum.

The new museum is expected to break ground at the end of 2023.

"Our original museum, which was founded by my mother, was based in a survivor's experience," said past board president Ellen Lang, the daughter of Tess Wise. "We're consistent with that founding, however. We feel like we're able to tell a much larger story."

Museum staff expect that the new building will greatly increase the number of students who can visit in person. While the museum provided programming for more than 25,000 students during the 2018-2019 school year, both on site and in schools, Kathy Turner, vice president of development and marketing, said she hopes that number will double or triple at the new 43,000-square-foot downtown location.

"What I still hear on a regular basis is that people don't know that we're here," she said of the original building at the Maitland campus. "So let's start there by saying that we exist. We're here and we've already started these conversations and this work."

Maitland, a suburb of Orlando, has one of the largest Jewish communities in Central Florida. In recent years, there has been tremendous growth in Orlando. A 2020-2021 study by the Cohen Center for Modern Jewish Studies at Brandeis University said the Jewish community in Orlando and surrounding areas numbers approximately 51,400 Jews living in 25,500 Jewish households.

"Yes, this is a strong Jewish community here in Maitland and we're right next door to the JCC and the federation," Turner said. "But I just want to note that we're not just building this for the Jewish community alone."

She said the expansion "will allow more folks to visit us, whether that be students or people that live here in Central Florida, our neighbors, or tourists that are coming in."

Known for its theme parks and other tourist attractions, the Orlando area saw $47 billion in visitor spending, and another $5.8 billion in local and state tax revenue in 2018, according to one report.

And both Orange County and the city of Orlando recognize the potential for this museum, providing $10 million from the county's Tourist Development Tax funds for the construction of the new museum. The city is also leasing the land to the museum for $1 a year for 99 years.

"The city of Orlando really invited us to be part of the cultural core and corridor of downtown Orlando," Lang said. "It's really an opportunity to welcome everyone in Central Florida and all of the visitors to be part of what we do." 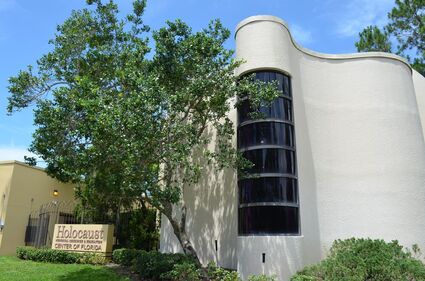 External view of the current location of the Holocaust Memorial Resource and Education Center.

The expansion and relocation has been in the works for several years, but both Lang and Turner say the timing is especially important right now.

"Antisemitism, hatred, racism, prejudice, bigotry - it is growing every day," Turner said. "I mean, we have neo-Nazis in our backyard every few months now in Central Florida."

In late January, a neo-Nazi rally in Orlando made national headlines when three individuals pepper-sprayed and punched a man who identified himself as Jewish.

Lang added, "We have more and more calls from the community from schools and the community at large, asking, 'what can we do, given what's going on in our world?' We need to address that. That's our mission. We're out of space where we are and this gives us an opportunity to do so."