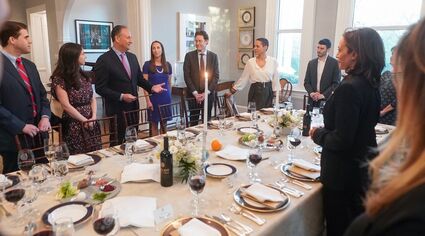 A photo posted to Twitter by Second Gentleman Doug Emhoff showed wine from the Psagot winery on the table at the White House seder, Apr. 16, 2022.

(JTA) - Wine from a West Bank settlement was on the menu at this year's White House Passover seder on Friday hosted by Vice President Kamala Harris and second gentleman Dough Emhoff.

But a spokesperson for Harris said the choice should not be construed as a political statement about Israeli settlement in the West Bank.

"The wine served at the seder was in no way intended to be an expression of policy," Herbie Ziskind, an adviser to Harris, said in a tweet.

The response from the Harris spokesman came after reporters spotted a bottle of wine from the Psagot winery in a photo of the seder that...