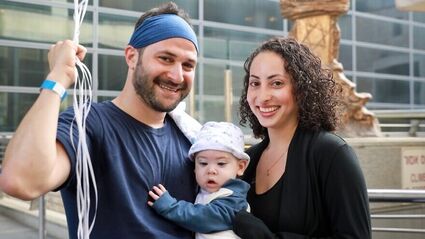 New immigrants Charley and Shaked Smith, and their baby son, Adar, on April 27, 2022.

(JNS) - Nefesh B'Nefesh, in partnership with Israel's Ministry of Aliyah and Integration, the Jewish Agency for Israel, Keren Kayemeth LeIsrael and JNF-USA, welcomed its 74,000th new immigrant on Wednesday.

Charley Smith, 34, made aliyah from Florida and reunited with his wife, Shaked, and their son, Adar, who arrived in Israel earlier this month. He landed just one week before Israel celebrates its 74th Independence Day.

Originally from Minneapolis, Charley's connection to the Jewish state began at a young age after his parents, Michael and Shelli Smith, traveled to Israel on a young lea...