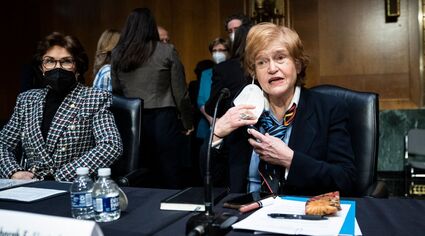 Deborah E. Lipstadt, nominated to be Special Envoy to Monitor and Combat Anti-Semitism, with the rank of Ambassador, appears during her Senate Foreign Relations nomination hearing on Capitol Hill, Feb. 08, 2022.

WASHINGTON (JTA) - Antisemitism is often not taken seriously until it becomes deadly, said Deborah Lipstadt, the Holocaust scholar whose nomination to be the State Department's antisemitism monitor was delayed as she tangled with Republican senators who were peeved at her criticisms of their side of the aisle.

Lipstadt chose the U.S. Holocaust Memorial Museum for her first talk Thursday since her Senate confirmation in March after contentious hearings.

She made good on her pledges to skeptical Republicans in the body that she would identify and target antisemitism on all sides.