Memorial Scrolls Trust loans out Torahs around the world 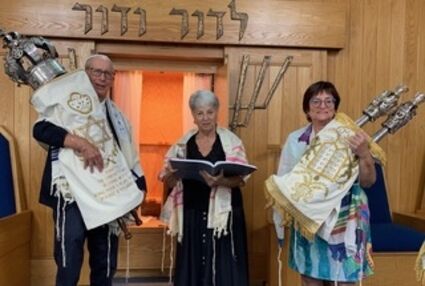 They escaped destruction by the Nazis, survived communism, and found their ways to new homes. This is a story of three Torahs that all have their roots in long-gone Czechoslovakian synagogues.

Up until World War II, Czechoslovakia had a thriving Jewish population rooted in hundreds of years of interaction with its Christian neighbors. With the rise of Hitler, however, came the rise of antisemitism and The Final Solution. Throughout Europe, synagogues were burned and Jews were deported to concentration camps. Almost all Jewish artifacts, including Torahs, candlesticks, and prayer books, were destroyed.

The one exception was Bohemia and Moravia, with its population of 115,000 Jews, which was declared a 'protectorate' of Germany. Miraculously, the artifacts remained unscathed throughout the beginning years of the war.

In 1942, however, the Nazis ordered all Jewish synagogue possessions in the region to be sent to Prague. The Jewish Committee of Prague, feeling that the Judaica would be safer if stored in one place, worked closely with the Nazis to collect and evaluate over 210,000 items. In the end, it took 40 warehouses to hold it all. Unfortunately, nearly every Jew who worked on the project died in the concentration camps.

The Czech Torahs survived the war but almost did not survive communism. The artifacts, including 1564 Torahs, sat in a musty, damp warehouse until 1963. At that point, the Czech government, in need of currency, made an arrangement with Ralph Yablon, a philanthropist and founder member of Westminster Synagogue in London that he put up the funds. On Feb. 5, 1964, the Torahs and other scrolls arrived at the synagogue. They were divided into three categories: usable condition, in need of some repair; and those deemed too far damaged.

The Memorial Scrolls Trust was then set up in London to preserve and restore the 1564 scrolls. They were then loaned out to Jewish communities around the world in need of a Torah under the condition that the Torahs were not to be sold; they only could be allocated on loan with the promise that they would be returned if the synagogue no longer operated. Each congregation was responsible for the Torah's upkeep. Each one had an identity tag fixed to one of the etz chaim, the wooden shafts onto which the Torah is rolled.

As of 2022, 1400 scrolls have been allocated on loan around the world including two in the Orlando area - the Southwest Orlando Jewish Congregation and Congregation Shalom Aleichem. 150 scrolls remain in the Memorial Scrolls Trust museum, which also has some 500 binders and wimples.

I first had the honor of holding a Holocaust Torah as a member of Congregation Beth Shalom, Clifton Park, New York. In 1981, the synagogue received one after requesting a replacement for the three that had been stolen. The circa 1870 Czech Torah, which once was housed in a synagogue in Vlasim, was loaned thanks to a gift from then congregants Abbey and Richard Green. It arrived from London with a tag stating: "The Old Testament of the Jews near Prague for the Central Museum."

At the time, Beth Shalom was less than 10 years old, an irony that was not lost on one of its congregants, Yetta Fox, who is a child of Holocaust survivors. Having the Torah at a new congregation is "almost like a second life," said Fox. "Having lost one community, there is now a new community that can nurture this Torah."

In 2007, the parchment was in need of repair. That June, the congregation held a rededication ceremony, which included a procession from the Clifton Park Town Hall to the synagogue five minutes up the road. The scrolls were passed from hand to hand under a chuppah that the children of the Hebrew school had decorated with Stars of David. Upon its arrival, the Torah was wrapped in a wimple, the cloth traditionally used to wrap a boy at his circumcision. "This is our baby," said Fred Pineau, a former president, "so we're wrapping our Torah."

David Clayman, the current president, reported that the Torah is still in good condition. To preserve it, however, it is left rolled to Parasah Beshalach (Exodus 13:17-17:16), which contains "The Song of the Sea." Every year, in the month of Shevat, the Torah is brought out and Beshalach is chanted. The congregation also brings the Holocaust scroll out for Simchas Torah, a holiday that celebrates the completion of the reading of Deuteronomy and the beginning of Genesis. The Torah is brought out and held for Kol Nidre, Erev of Yom Kippur. "The scroll is so fragile, we are afraid to roll it to other parashot," said Clayman.

When we moved to Florida, we joined Congregation Shalom Aleichem, which was founded in 1981, ironically the same year Congregation Beth Shalom had received its Czech Torah. Initially, congregants met at the Kissimmee Women's Club. Holocaust survivor Harry Lowenstein and his wife, Carol, began to press for a building of their own. "I saw a synagogue burn," said Lowenstein, "and I was determined to build another one." Starting with a $120,000 contribution from Sandor Salmagne, another Holocaust survivor, the Lowensteins raised another $60,000 for building expenses.

As the synagogue on Pleasant Hill Road neared completion, the Lowensteins continued to work tirelessly to obtain the prayer books for every day and holy days, the Torah finials, and the Yartzheit (memorial) board. Most important to the congregation was obtaining a Torah.

Lowenstein and other members reached out to the Memorial Scrolls Trust, noting in the correspondence that four of its members were Holocaust survivors. "Our Temple will be dedicated to the memory of the victims of the Holocaust," wrote then president Henry Langer. "We would therefore deem it an honor to have you lend us a Scroll for our Temple."

With the Lowenstein's financial support, they were able to obtain a Scroll, believed to be from Pisak-Strakonice area in what was then Czechoslovakia, about 60 miles south of Prague and dated back to circa 1775.

Once they received word that they would indeed be loaned a Czech Torah, it was now up to the congregation to figure out how get it from London to Kissimmee. The Lowensteins realized that they had British friends who had a vacation home near the synagogue. "[Our friend] sat on the plane with the Torah on his lap for 12 hours," recalled Carol Lowenstein. "He would not let it out of his sight until he could hand the Torah to Harry."

For those who had miraculously escaped hell, welcoming the Torah was like welcoming another Holocaust survivor. "It's like holding a piece of history," said Phil Fuerst in 1993. "You feel like you own a piece of a world that survived."

In 1982, Sharon and Barry Kaufman, now residents of Kissimmee, were responsible for obtaining a Holocaust Torah for Jewish Community North in Spring, Texas, in honor of their daughter Robin's upcoming bat mitzvah. While awaiting completion of their new building, the congregation was holding services at Christ the Good Shepherd Catholic Church. Their only Torah was on loan from another synagogue. The Kaufmans worked with Rabbi Lawrence Jacofsky, the regional director of the United Association of Hebrew Congregations, to obtain Scroll MST#20, a circa 1850 Torah that had previously been housed in a synagogue in Kostelec/Orlici, Czechoslovakia.

When their precious cargo arrived at the Houston airport in February 1982, Barry and Sharon immediately brought the Torah to the church to show Father Ed Abell, Good Shepherd's priest and their good friend. The three of them carefully unrolled the scroll to where the last Torah reading before the Jews in the community were rounded up and sent to concentration camps: Yom Kippur 1938. Father Abell then read from the scroll in flawless Hebrew.

The Kaufmans brought the Torah home that evening to show Robin. As they slowly unrolled the entire scroll on their pool table to make sure it was undamaged, they found a cardboard tag that read: "Aeltesternrat der Juden Prague. The Old Laws of the Jews of Prague. To be soon displayed in the Thousand Year Reichs' Museum of Decadent Jewish Objects."

At Robin's bat mitzvah in May 1982, the Torah was dressed in a cover sewn and embroidered by Barry's mother. In a moving speech to the congregation held at Good Shepherd, Barry spoke eloquently about the Torah's history. 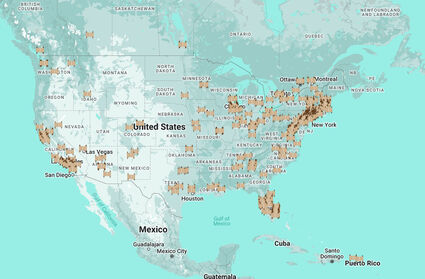 Screenshot of all the synagogues in the United States where Memorial Torahs are on loan.

"If this Torah could talk - might it share with us the heart-wrenching knowledge of a prosperous people whose world had suddenly been taken from them, whose home and synagogues were gutted and destroyed for the value of their belongings? Would it tell us of the helpless terror in the fragile hearts of old men and women forced to watch their children brutally slaughtered before their own end was to come."

After Barry spoke, the Ark was opened, and the Holocaust Torah was passed from the rabbi to Barry to Sharon to Robin. Clutching it tightly, Robin walked through the congregation. For the first time in two generations, a B'nai Mitzvot carried it with joy and reverence throughout a tearful congregation.

Three Czech Torahs. Three congregations. As Gloria Kupferman stated in her speech at the Congregation Beth Shalom Torah rededication, contrary to the Nazis' plan to eradicate the Jewish people, "We are by no means extinct. We are alive. We are thriving."