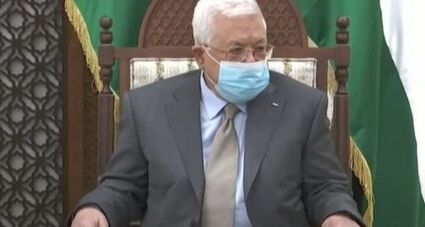 Palestinian Authority President Mahmoud Abbas failed to show up for a press conference in Ramallah on Wednesday morning, where he was expected to make a public appearance in order to dispel rumors that he is dead or very ill.

Although the reports cannot be independently confirmed, the Palestinian street is buzzing with rumors that the wildly unpopular octogenarian, whom the vast majority of his constituents believe should resign, is in poor health.

Last week, Arabic-language media reported that Abbas had assigned emergency powers to a trusted adviser, Hussein al-Sheikh, N12 reported. The move was seen as paving the way for al-Sheikh to succeed him as head of the PA and sparked anger among some members of his Fatah party.

Although al-Sheikh blasted Arabic media for spreading rumors about Abbas' death, calling the reports "yellow news" and insisting that he's in good health, the president's absence from the press conference has not quelled suspicions about his condition.

Abbas did address the conference via a phone call but notably did not connect through a video link that would have allowed the public and journalists to see him.

On social media, Palestinians were vocal about their doubts that Abbas is doing well. Some demanded that he post a picture holding today's newspaper in order to prove that he's still alive, according to a report from security blogger Abu Ali Express.

Because Abbas has never assigned a deputy or vice-president role that would streamline the succession process, infighting within Fatah over who will take over after the 87-year-old dies has intensified in recent weeks.

According to a TPS report, some believe the reports about Abbas' ill health were deliberately spread in order to sow chaos both within the Fatah party and PA-controlled areas.

"This is the work of the Israeli Shin Bet," a senior PA official told TPS.

But others believe that the source of the rumors may be Abbas' political rival, Muhammad Dahlan, who has a long-standing spat with al-Sheikh.

Another PA official confirmed to the outlet that Abbas' health is "unstable" and that he recently traveled to Germany for specialized medical care.

The potential power vacuum that will be left behind by Abbas' death is of great concern to Israel, as the Hamas terror group surpasses Fatah's popularity throughout the PA.

Hamas defeated Fatah in a landslide during the Birzeit University student council election, and opinion polls find that the majority of Palestinians prefer Hamas to the establishment party.

In 2021, Abbas cancelled national elections that would have likely seen him unseated by a member of Hamas or Islamic Jihad. He attributed the postponement of the vote to Israel refusing to allow voting to take place in eastern Jerusalem, but most believe the move was a way for Abbas to preserve power.