Map is a guide to antisemitism 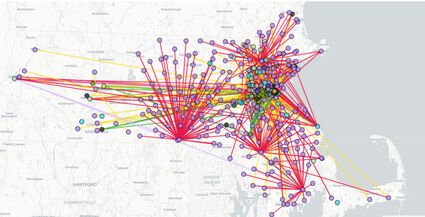 A map of purported connections between Jewish groups and other organizations in Massachusetts created by progressive activist group The Mapping Project, which says its goal is to map 'institutional support for the colonization of Palestine."

These are a few of the locations on a dense interactive map of "Zionist leaders and powerhouse NGOs" in Massachusetts created by an activist group that says it aims to expose "local institutional support for the colonization of Palestine" and reveal how support for Zionist causes is a nexus point for various "other harms" in society, ranging from gentrification to the prison...