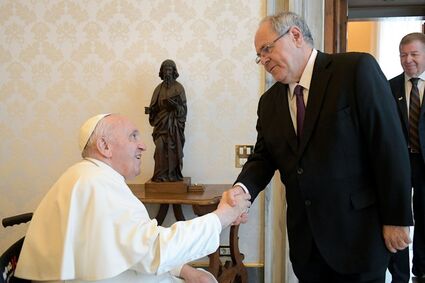 (JTA) - Amid controversies concerning the Vatican's Holocaust-era record, Pope Francis and the head of Israel's state museum on the Holocaust, Yad Vashem, met for a first-of-its-kind talk.

Yad Vashem Director Dani Dayan met with the pope Thursday at his office in the Vatican. During their 30-minute talk, they spoke about ways to "bolster collaborative activities" in areas of "Holocaust remembrance, education and documentation, and to discuss efforts to fight antisemitism and racism worldwide," Dayan's office wrote in a statement.

Dayan thanked the pope for his 2020 decision to open the Vati...