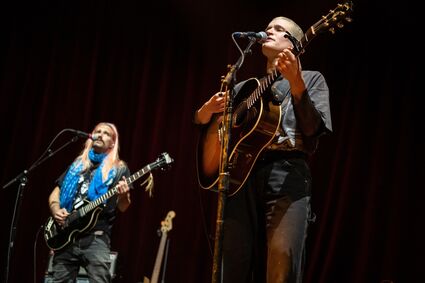 Kyle Gustafson for The Washington Post via Getty Images

Max Oleartchik, left, who is Israeli, and Adrianne Lenker of Big Thief perform at The Anthem in Washington, D.C.

(JTA) - Days after defending their decision to play in Tel Aviv, the hometown of their bass player, the indie folk rock band Big Thief canceled two scheduled Israel shows, writing that they "oppose the illegal occupation and the systematic oppression of the Palestinian people."

Last week, the Grammy-nominated band had announced two shows at Tel Aviv's Barby venue in July, and said that they would donate the gig profits to NGOs that aid Palestinian children. They also noted that they wanted to explore bassist Max Oleartchik's hometown, and said that they were unsure of their thoughts on the...