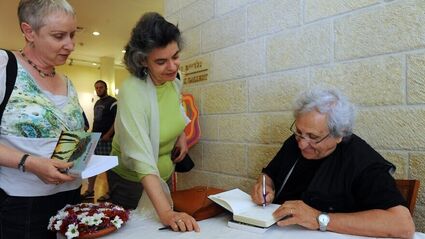 A.B. Yehoshua autographs one of his novels at the International Writers Festival at Mishkenot Sha'ananim in Jerusalem in 2010.

(JNS) - When it comes to novelist A.B. Yehoshua, who died on June 14 at the age of 85, it's difficult to separate his romances from his political activism. Despite his extreme views on Jewish identity, the Holocaust and the Palestinian conflict, he was pragmatic in his opinions, taking in the reality on the ground.

Born on Dec. 19, 1936, to Yaakov Yehoshua - a multi-generation Jerusalemite - and Malka, who immigrated to Israel from Morocco four years before his birth, he was named Avraham Gabriel "Boolie" after his maternal grandfather (A.B. was a pen name). "We did not come here because o...