Sandy Koufax honored with a statue at Dodger Stadium 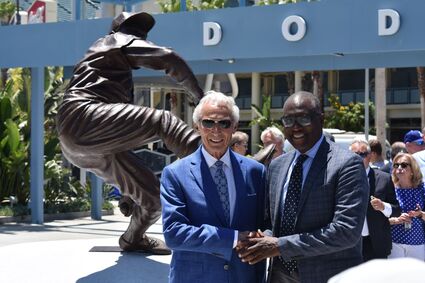 Sandy Koufax (l) with sculptor Branly Cadet in front of the sculpture of Koufax.

LOS ANGELES (JTA) - For Jewish sports fans around the world, Sandy Koufax has for decades occupied an unmatched legendary status.

Now, 57 years after the Hall of Fame pitcher sat out a World Series game to observe Yom Kippur, Koufax has officially been immortalized with a statue at Dodger Stadium - next to his former teammate, Jackie Robinson.

The Los Angeles Dodgers unveiled the Koufax statue with a pregame ceremony on Saturday, three years after the statue was initially announced. The unveiling was originally planned for the summer of 2020, before the COVID-19 pandemic hit.