Going for gold at Maccabiah Games 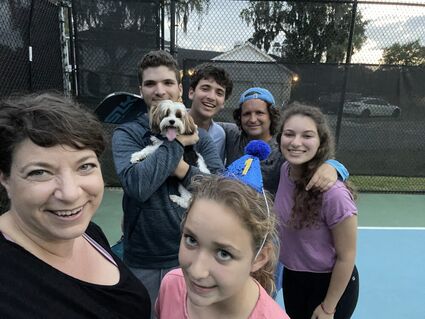 The World Maccabiah Games, first held in 1932, are an international Jewish and Israeli multi-sport event now held every four years in Israel. The Games were declared a "Regional Sports Event" by, and under the auspices and supervision of, the International Olympic Committee in 1961. Not to be confused with the JCC Maccabi Games, which is the largest organized in-person Jewish teen sports experience in America sponsored by the JCC Association of North America and held every year in the United States, the Maccabiah Games are the third-largest sporting event in the world, with 10,000 athletes competing.

This year competing among those 10,000 athletes will be the Cohen family of Winter Park. Actually, just Dr. Daniel Cohen and his two sons, Nathaniel and Zachary, will be competing in the tennis games. Cheering them on will be Cohen's wife, Esther, and his daughters, Ela and Talya.

Cohen, a fan of tennis his entire life, is a urologist in private practice at the Urologist Center of Winter Park. Though in his early years he played tennis for fun and recreation, he now plays competitively at the Winter Park Racket Club and the Winter Park Tennis Center.

Nathanial and Zachary have played tennis most of their lives. They trained under Vladimir Obradovic, a Serbian professional tennis player, and now the tennis director at The Roth Family JCC.

Nathaniel is a senior at Trinity Prep and is the No. 1 player and captain of the Trinity team. He will play in the 18 and under division

Zachary is a sophomore at Winter Park High School and was the No. 1 player on the Winter Park team. He will play in the 16 and under division.

The boys headed to Israel on July 6 to participate in a program for young athletes on Jewish culture. This is not their first trip to the Land. They have been twice before for family gatherings. Nathaniel said of Israel that it is a "very nice place. I feel very involved [there]."

Talya is already in Israel, having just finished a Birthright trip and chose to extend her stay in Haifa to attend an ulpan program.

Dan and Esther and Ela will travel to Israel on July 11. Dan will compete in the 40 and over men's tennis games. The Game Openings is July 12 and will be played in Jerusalem, Haifa and Netanya. At this point none of the Cohens know where or when they will be playing, so they may or may not be able to see each other's games.

The Games conclude on July 25, and the Cohens plan to return to Winter Park on the July 26 - hopefully rejoicing with gold! (Heritage will keep its readers posted) But even if there are no Cohen winners of the Games, the family is looking forward to participation in the tennis games as representatives of the United States, and upon their return, the dedication of the new tennis facility at The Roth Family JCC - the Danny and Esther Cohen Tennis Facility, where Dan and Esther hope to bring the JCC Maccabi Games (the North American version of the Maccabiah Games in Israel) here in the future.