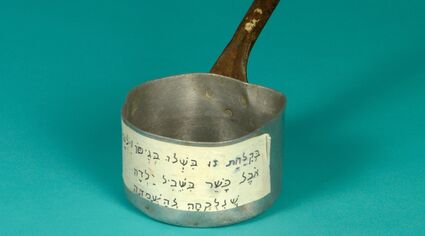 The Farber family, adhering to Jewish tradition even after the murder of their 4-year-old daughter Yocheved, continued used this Kosher cooking pot as a symbol of resistance, inscribed in Hebrew: "in this pot kosher food was cooked in the Vilna ghetto for a girl who was taken to be annihilated."

(New York Jewish Week) - A young child's diary, a favorite doll, a cookbook of family recipes, a report card, a Torah scroll smuggled to the United States and a silver spoon found among the rubble at a concentration camp.

All of these objects are on display in "The Holocaust: What Hate Can Do," an expansive new permanent exhibition at the Museum of Jewish Heritage in Lower Manhattan that opened over the holiday weekend. The exhibit emphasizes the individual human stories and the Jewish lives lived before, during and after the Holocaust.