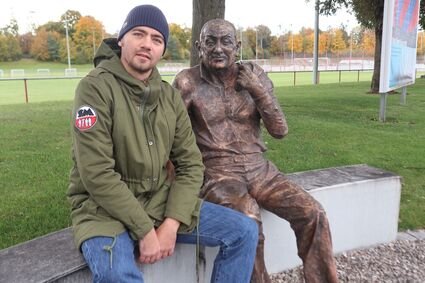 Simon Mueller, chair of the Kurt Landauer Foundation, next to the Landauer sculpture at Bayern Munich's training grounds.

(JTA) - In May, the Bundesliga, Germany's top soccer league, concluded its season on what has become a familiar note: the Bayern Munich club won its 10th straight league title, an unprecedented feat in any of the top European soccer leagues.

Although the club has become the most successful team in German soccer history, it wasn't always a juggernaut. The seeds of its domination were planted in the early 20th century by Kurt Landauer, an early Jewish president of the team who survived the Holocaust and returned to helm the team again in the late 1940s.