A 'dove of peace' from IsraAID stands with the Ukraine 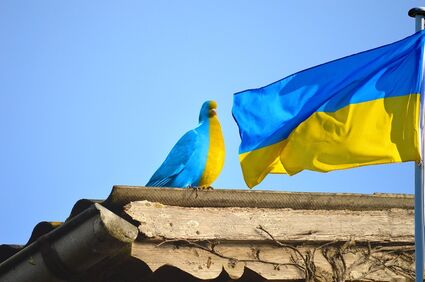 (JNS) - A large cargo of medical and humanitarian aid was recently collected and delivered to Ukraine by the Israeli international humanitarian aid organization IsraAID and the Chamber of Commerce and Industry Israel-Ukraine.

A total of 31 pallets weighing 9 tons (19,841 pounds) were delivered to the city of Kharkiv on July 6, the Ukrainian embassy in Israel announced on its Facebook page.

The cargo contained tourniquets, bandages, occlusive dressings, chest seals, surgical packs, hygiene kits and diapers. The embassy said these items "will help save the lives of Ukrainians who are suffering from the horrors of the Russian invasion."

On its own Facebook post, the Chamber of Commerce and Industry thanked the individuals and companies who donated items for the cargo sent to help Ukrainians affected by the war.

IsraAID's Emergency Response team has been working over the last several months in some of the worst affected cities in Ukraine during the country's ongoing war with Russia.

The organization delivered more than 700 kilograms (1,543 pounds) of rice and 300 kilograms (661 pounds) of tuna last week to Ukrainian cities severely affected by food shortages. IsraAID has also been operating for the last four months in a tent at the Moldova-Ukraine border to welcome and help Ukrainian refugees fleeing their home country.