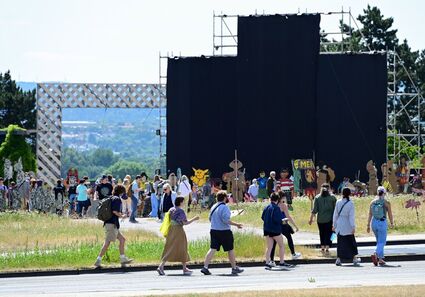 Art lovers look at the large painting "People's Justice" (2002) by the Indonesian collective Taring Padi, covered with black cloth, on Friedrichsplatz in Kassel, Germany, June 28, 2022. Several antisemitic motifs could be seen on the banner, prompting a debate about the show's handling of antisemitic content.

(JTA) - The director of a major international art exhibition has resigned after a work that included caricatures of Jews and Israelis ignited a reckoning over antisemitism.

The scandal leaves Documenta - a sweeping, decentralized exhibition staged every five years in Kassel, Germany - on uncertain territory for the future. Documenta announced that the Anne Frank Education Center in Frankfurt, would review all of the work in the exhibition, but the center's director said announced on Friday that the exhibition's management had not supported the endeavor.