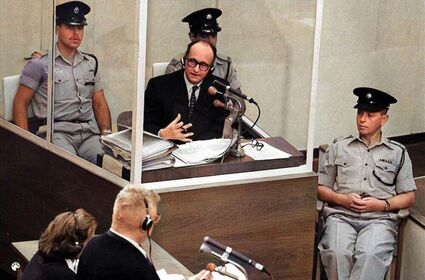 Adolf Eichmann on trial at Beit Ha'am, a community theatre temporarily reworked to serve as a courtroom capable of accommodating 750 observers.

Eichmann claimed he was bureaucrat following orders. Recently released transcripts of conversations he had with a Nazi journalist show Eichmann boasting of his significant role in executing the Final Solution.

These are the bone chilling words of Adolf Eichmann, the driving force behind the Nazis' "Final Solution to the Jewish Question," and architect of the murder of millions of Jews: "Every fiber in me resists that we did something wrong. I must tell you honestly, had we killed 10.3 million Jews, then I would be satisfied and say, 'Good, we exterminated an enemy.' Then we would have fulf...