Israel pummeled with over 1000 rockets by Islamic Jihad 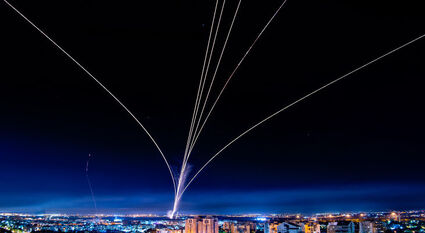 A long exposure picture shows iron dome anti-missle systerm as it fires interception missile at rockets fired from the Gaza Strip to Israel, as is seen from the southern Israeli city of Ashdod.

The Israel Defense Forces on Saturday was preparing for a "week of fighting" against Palestinian Islamic Jihad in the Gaza Strip, as terrorists in the enclave fired over 1000 rockets at the Jewish state within 48 hours.

The IDF said that the Iron Dome missile defense system had successfully intercepted 95 percent of the projectiles fired by PIJ that were headed for populated regions.

One projectile struck a family home in Sderot, whose inhabitants had secured themselves in a shelter and were uninjured.