Jewish Agency in Russia soldiers on despite tensions, immigration surge 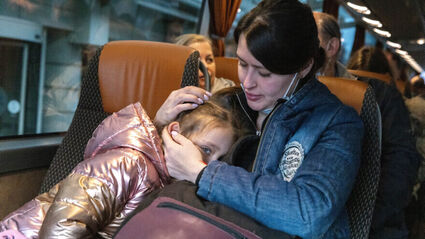 Jewish Ukrainians who fled war zones in Ukraine, seen leaving for the airport to board a Jewish Agency plane to Israel, March 6, 2022, in Warsaw, Poland.

(JNS) - The Jewish Agency, which helps Jews immigrate to Israel, stands on shaky ground in Russia, as a Moscow court is set to hold a trial on its dissolution August 19. Even though it's operating under a cloud of uncertainty, and immigration to Israel has skyrocketed, the Agency continues to operate business as usual, JNS has learned from a government source familiar with the matter.

Since the outbreak of the war on Ukraine in February, 19,100 Russians have immigrated to Israel, a leap from the 7,733 immigrants that came in 2021, according to Jewish Agency numbers. It's not a stretch to s...