NBA's 'Freedom' spreads message of peace through sports in Israel 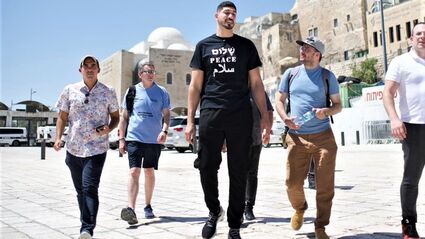 Enes Kanter Freedom walks to the Western Wall in Israel, there to help train kids at a youth basketball camp in Israel, August 2022.

(JNS) - "If you could change anything in this world, what would it be?" asked NBA star Enes Kanter Freedom, while seated among 30 Jewish, Christian and Muslim, children during a break in the action at a youth basketball camp he was helping to run this week at the YMCA in Jerusalem.

To Freedom's delight, the most popular answer given by the children was: "We would want peace!" The 11-year NBA veteran, who currently is a free agent and a well-known human rights activist, was in Israel to lead basketball camps in Jerusalem and Haifa so as to unite players from different backgrounds while sprea...