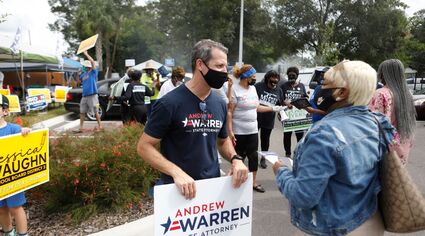 Andrew Warren, the former state attorney for Hillsborough County, Florida, was suspended from his position on Thursday morning by Gov. Ron DeSantis, due to his refusal to criminally prosecute abortions.

(JTA) - Florida Gov. Ron DeSantis ratcheted up the fight over the state's new 15-week abortion ban Thursday when he suspended a Tampa-area state attorney who had vowed not to prosecute violations.

The move also vaulted yet another Jewish figure into the fight's foreground.

Andrew Warren, the state attorney for Hillsborough County, had joined more than 90 other attorneys nationwide in pledging not to prosecute individuals who seek or provide abortions in the wake of the U.S. Supreme Court's decision in June to overturn Roe v. Wade, the 1973 ruling that had guaranteed abortion rights.