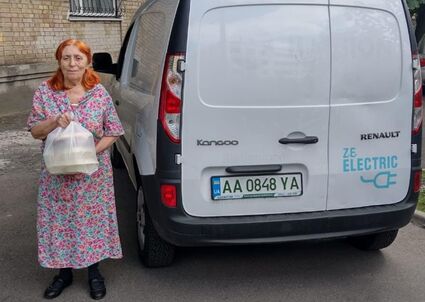 A woman takes out an aid package from an electric car owned by the Jewish Federations of Ukraine in Kyiv, Ukraine, Aug. 1, 2022.

(JTA) - Negotiating the bomb-scarred roads of eastern Ukraine is the easy part of Ilya Pulin's day as he delivers food and medicine across eastern Ukraine as a volunteer.

The difficult part, he told the Jewish Telegraphic Agency, is finding and paying for fuel in the war-torn country.

Since Russia invaded in February, "fuel prices have doubled. There are hour-long lines at petrol stations. And until a few days ago there was a five-gallon ration per person," said Pulin, a 38-year-old Jewish father of two in Dnipro who works as science professor specializing in thermodynamics.