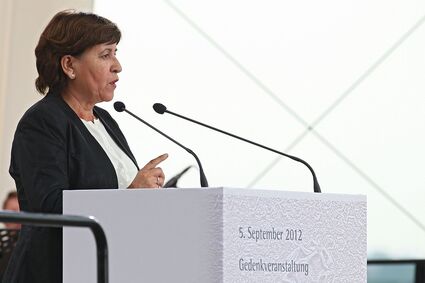 Ankie Spitzer, widow of fencing coach Andre Spitzer, speaks during a memorial service commemorating the 40th anniversary of the 1972 Munich Olympics terrorist attack at the airport on Sept. 5, 2012 in Fuerstenfeldbruck, Germany. Political leaders, Jewish representatives, diplomats and family members from Israel were among guests who arrived to remember the 11 Israeli athletes and one German policeman killed in the 1972 hostage-taking and its aftermath by members of the Black September Palestinian terrorist organization. Most of the victims, as well as five terrorists, were killed after an attempt by German police to intervene went wrong at Fuerstenfeldbruck airport.

(JTA) - All but one of the family members of the 11 Israeli athletes murdered during the 1972 Munich Olympics are planning to boycott a ceremony marking the 50th anniversary of the incident, calling the financial compensation that the German government will offer them "a joke."

According to a German government memo obtained by The New York Times, various agencies have thus far paid a total of 4.6 million euros ($4.8 million) to the families, and Germany is expected to offer an additional 5.4 million euros ($5.6 million).

The families are reportedly asking for a sum about 20 times larger th...