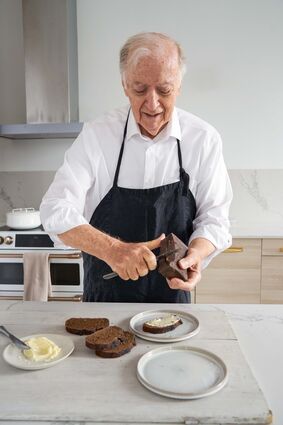 Eugene Ginter makes the chocolate sandwich that his mother made for him after he was liberated from Auschwitz.

(JTA) - Eugene Ginter was 12 days shy of his sixth birthday when he was liberated from Auschwitz in January 1945. Emaciated and alone, Ginter landed first in a hospital and then in an orphanage in Krakow, the Polish city where he was born. Several months later, miraculously, he was reunited with his mother.

Her first order of business was to help him regain weight and health, but he had no interest in food after being deprived of it for so long. So she created a rich sandwich made of things she knew he liked: black bread thickly coated with butter and finished with grated dark chocolate.