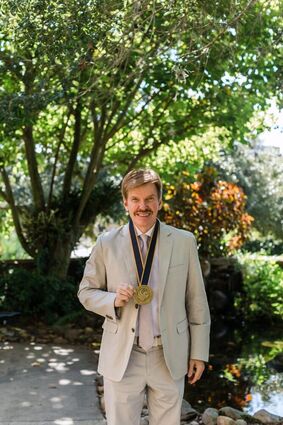 Kenneth Hanson wearing the medallion he received at his investiture ceremony.

Southwest Orlando Jewish Congregation started the year off with a new student rabbi, Rabbi David Chapman. Before he became a rabbi, he had a successful year in the theatre. His first Broadway show was “The Addams Family” musical with Nathan Lane and Bebe Neuwirth.

Jewish Family Services of Orlando formed a partnership with Central Florida Hillel. A JFS mental health therapist became available for open hours in Hillel’s Wellness Lounge, which was funded by a grant from the Jewish Federation of Greater Orlando.

Kenneth Hanson, professor and program director of Judaic Studies at UCF, was invested into the Tess and Abe Wise Endowed Professorship in Judaic Studies. An expert on the Dead Sea Scrolls and author of several books, Hansen was recognized for his accomplishments and his investiture allows him to advance his work and research.

In an effort to be more involved in the Southwest community, the Rosen JCC Executive Director Reuben Romirowsky developed the concept of a Town Square. With 272 children enrolled in the Early Childhood Learning Center, and 32 languages spoken there, Romirowsky still did not see the JCC as a part of the whole community. “No one organization can do this alone,” he said, “but with other nonprofit partners we will be a coalition that will create new programs and services for every stage of the life cyle.”

The community study, commissioned by the Jewish Federation of Greater Orlando, was finally available for review. The 104-page study revealed the community had grown to about 51,400 people.

Chabad Orlando once again lit up the Amway Center with its Grant Menorah . “there is no better place to promote the message of Chanukah than the Amway Center in front of tens of thougsands of people,” said Rabbi Tzviky Dubov.

Longtime Orlando resident Sonia (Sunny) Mandell passed away of Dec. 13, 2021. She was married to Lester Mandell, z”l, and became the first individual to raise over $1 million dollars for the Orlando Jewish community.

Marvin Friedman renewed his Jewish identity with a second bar mitzvah on Jan. 8, 2022. He was first called to the Torah in 1955 in Cincinnati, Ohio.

The Jewish Federation of Greater Orlando received $150,000 in state funds to secure a new security system for the campus.

Congregation Ohev Shalom honored Cantor Allan Robuck with a gala and concert, “From Bimah to Broadway.”

Six teens traveled to New York for the 14th annual CTeen Shabbaton, an international gathering of close to 3,000 Jewish teens. Led by Rabbi Yanky Majesky of Chabad North Orlando and Mrs. Fraidy Dubov of Chabad of Greater Orlando, the teens were treated to a thrilling, non-stop program with tours of Manhattan, inspiring Shabbat meals, talks by renowned speakers and a highly anticipated closing ceremony.

Central Florida Hillel celebrated its 20th anniversary with a special dinner honoring those who made it possible. The event highlighted CFH’s achievements as well as the leadership, vision and generosity of the Alan Ginsburg family, Marc Katzen and Hank Katzen.

Going for the gold at the Maccabiah Games were the Cohen family of Winter Park — dad, Dr. Dan Cohen and his two sons, Zachary and Nathaniel had qualified for the tennis teams, while wife Esther and daughters Ela and Talya cheered them on. 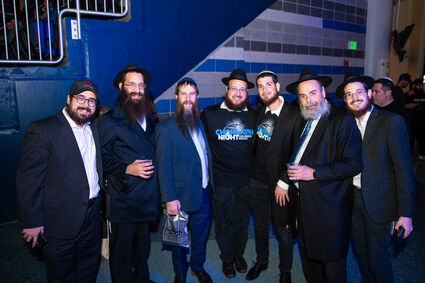 Dr. Edward Zissman was presented the Heritage’s Human Service Award for the tremendous amount of work he has done for more than 50 years in the Orlando Jewish community, including being instrumental in the formation of the Jewish Academy of Orlando and the PJ Library, among many other things.

The Jewish Federation and The Roth Family JCC merged to become Shalom Orlando.

Temple Israel was recognized by the Governor’s Faith and Community Based Initiative for their work in serving vulnerable populations in the community.