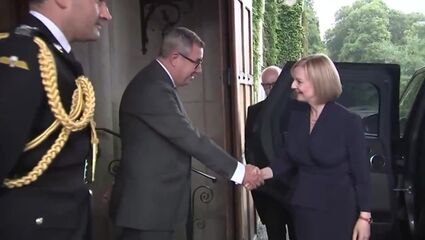 Liz Truss arrives at Balmoral Castle to be sworn in as the new prime minister.

(JNS) - Liz Truss won the vote on Monday to become the leader of Britain's Conservative Party, a contest that also decided who will replace Boris Johnson as prime minister.

Truss, who served in Johnson's Cabinet as foreign secretary, was the odds-on favorite. She received 57.4 percent of the vote among party members, while her opponent, former chancellor of the exchequer Rishi Sunak, garnered 42.6 percent.

In a brief acceptance speech, Truss said that she would cut taxes, tackle the energy crisis and improve national health care.

The first woman from her party to serve as foreign secretary,...