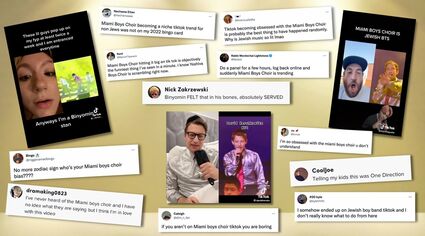 The Miami Boys Choir has gone viral on TikTok and Twitter, creating a new generation of fans of the Orthodox pop group.

(JTA) - "K-pop is over," one Twitter user declared. "We're listening to Orthodox Pop from now on."

With those words, the Miami Boys Choir has transformed over the last two weeks from a singing group popular among Jewish insiders to a viral sensation. On TikTok and Twitter, users have shared clips of the group's concerts, overlaid its music with other scenes and inserted themselves into split-screen duets. New fans of MBC, as the group is known for short, have chosen their favorite singers through their stage presence, their vocals, or simply, their "it" factor.

Some are finding it hard to c...