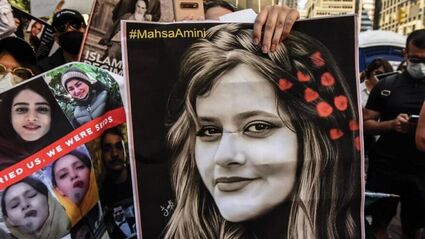 A protester holds up a picture of Mahsa Amini, a 22-year-old Iranian woman whose death in the custody of Iran's "morality police" has sparked widespread unrest.

(JNS) - As the ongoing protests in Iran reached their two-week mark on Friday, the death toll has reportedly exceeded 80 people.

Iranians have been protesting against the regime since the Sept. 16 killing of Mahsa Amini, 22, who was arrested for "unsuitable attire" by the Islamic Republic's "morality police" and then beaten to death.

Iran Human Rights, a Norway-based NGO, tweeted that "at least 83 people including children, are confirmed to have been killed in (the) #IranProtests."

On Friday, the influential American Israel Public Affairs Committee (AIPAC) also weighed in on the protests.