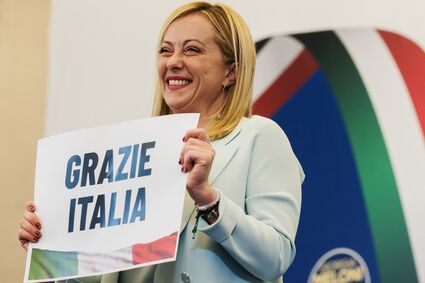 Giorgia Meloni is seen holding a placard quoting "Thanks Italy" in a press room in Rome, Sept. 26, 2022.

(JTA) - The success of Giorgia Meloni's Brothers of Italy party in Italy's national election last week means the country is poised to have its most right-wing government since World War II, when Italy was Hitler's staunchest ally in Europe.

The prospect has unnerved many Italian Jews, even as several of their leaders appear to be taking a wait-and-see approach to Meloni's leadership, refraining from making public statements about the results.

"Faced with the prospect of a prime minister that is affiliated with a party that ideologically is the heir of the Italian Social Movement, a good par...