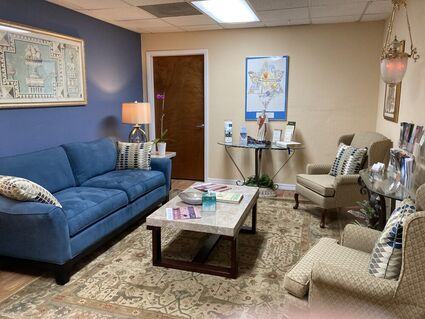 Families enter into a comfortable lobby at 933 Lee Road, Suite 101.

Thirty-eight years ago, Beth Shalom Memorial Chapel, the only Jewish funeral home in Central Florida, opened its doors at 115 W. Gore Street in Orlando to serve the funeral needs of the Jewish community from Orange, Osceola, and Seminole counties, as well as making arrangements for other contiguous counties and out of state burials. Thirteen years later they moved to 640 Lee Road, gaining much needed space.

Recently, however, Beth Shalom had to move from this location because it became landlocked when, in 2010, the Florida Department of Transportation widened I-4 and constructed a new road next to the facility. The new road limited families' access to Beth Shalom for arrangements and services. It also hindered Beth Shalom's ability to expand.

Owner and licensed funeral director in charge Manny Adams sold the building in January 2022. The deadline to move out was July 9, and Adams found a new location for the office suites and moved during the last week of June to 933 Lee Road, Suite 101. Shortly after the purchase, the building at 835 Lee Road became available, and Adams immediately rented it. The necessary relocation afforded Adams the opportunity to reconceptualize Beth Shalom's physical space with the two buildings.

The 933 building, which is easy to find, is solely used for making funeral arrangements. It houses a comfortable, peaceful lobby; a room with seating to select a casket virtually, where families easily view a selection of caskets on a 65" screen; a cremation room where families can physically inspect the caskets; and an area with a display of burial plaques as part of their decision-making process. This office also houses the business and public relations offices, and also an archive room which contains the physical records of the 4,000 funerals Beth Shalom has been entrusted with since 1984.

The 835 Lee Road location, called the Beth Shalom Memorial Chapel Care Center, houses the prep room/garage and chapel. This is where the deceased's body is taken and prepared for burial or cremation. The prep room is large enough to accommodate the Tahara Committee's ritual for two decedents. Sam Odom, comptroller, shared that the Chevra like the prep room because it is larger and gives them more room to do what they need to do during the ritual for the decedents.

The chapel can seat 30 people for a memorial service before interment at a nearby national cemetery.

Adams, who has been in the funeral business for 53 years, finds his work offers him the reward of helping people who aren't able to help themselves. Licensed funeral director Ray Webber and Executive Director/Public Relations Director Sammy Goldstein concur with Adams, and are available to take care of everything for the families during times of bereavement.