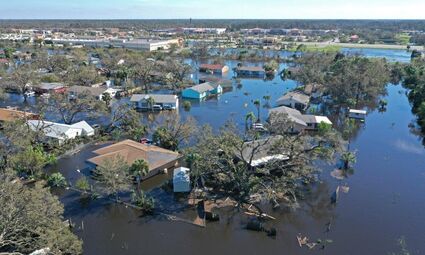 Fort Myers homes flooded in the aftermath of Hurricane Ian.

It's unbelievable to see what happened to my city, my friends, my community.

Hurricane Ian decimated Fort Myers Beach, along with homes, businesses, roads and vehicles, and left much of the area unrecognizable. It has been described as an apocalyptic scene. The death toll is currently at 109 deaths in the United States, the vast majority in Florida.

Two Holocaust survivors in their 90s are among the many Southwest Floridians displaced by Hurricane Ian last week. The couple lived in a mobile home park in Fort Myers.

But the Category 4 storm with winds up to 150 miles per hour destroyed their mobile home, leaving the couple living temporarily with their son and daughter-in-law in Fort Myers. Unfortunately, the son and daughter-in-law had sold their old house before the hurricane hit-and their new house is now underwater. So the family is staying in the old house that's been sold, and had until Oct. 11 to vacate it.

"My first mission is to rehome those Holocaust survivors. They're homeless," declares Debbie Sanford, executive director of the Jewish Federation of Lee and Charlotte Counties.

Ian's wrath has left Sanford with her hands full. The Jewish Federation is redoubling its efforts to provide the community with food and emergency assistance. "It's unbelievable to see what happened to my city, my friends, my community, my beaches," she said in an interview with Aish.com.

"We had 145-mile-per-hour winds for seven hours. It was just pounding our homes," Sanford related. "My neighborhood looks like a war zone. We can barely get out now."

Even in the wreckage, there is hope.

Sanford counts herself fortunate. Her ranch-style home sustained relatively little damage. "When we first moved into our house, my husband said, 'It's so ugly. It's got a brown metal roof on it.' Between God and that brown metal roof, we are so lucky."

They had no power for three days after the hurricane hit, and weren't able to tune into the news and learn the extent of the devastation.

"I wanted to drive to the Federation office to see what it looked like. When we reached the nearby Gateway community, I got a signal and was able to make calls and send emails to family, rabbis and board members to find out if everybody was okay and let them know we were."

Lee and Charlotte counties are home to about 10,000 Jews and 10 synagogues, temples and Chabad centers. Rabbis reported their facilities seemed to be in good shape.

The Federation office on the main road that goes to old Sanibel and Fort Myers Beach didn't sustain water damage, even though streets were flooded. Sanford and her husband had put up hurricane shutters at the building the day before the storm hit. "There was no glass, no broken windows, nothing. We got so lucky. God was really watching over us," she said.

Meanwhile, rescue crews are going door to door searching for survivors. Power is still out at the water treatment plants and elsewhere. Thousands of linemen are working to restore power to the area. More gas stations are reopening. The grocery stores are getting deliveries now.

With cell phone and Internet service back up, calls are flooding in for assistance. Says Sanford: "We're hearing horrible stories of people hiding in their attics. They've made thousands of rescues of people who stayed in their homes."

The Federation is swamped with offers of help. Sanford has received calls from Jewish organizations and individuals all over the United States. The Jewish Federation & Foundation of Northeast Florida was due to make a delivery run of supplies from Jacksonville, some 300 miles away, before Yom Kippur.

As for on-the-ground help, Sanford appreciates the many offers of assistance but stresses, "We're not taking out-of-area volunteers now, because there's no place to put people up. And a lot of us don't have power. It's not safe. Let us recover and then help us rebuild."

The need for financial support is urgent, however:

• The Jewish Federation of Lee & Charlotte Counties has established an Emergency Relief Fund to assist those affected by Hurricane Ian: www.JewishFederationLCC.org

• Another way to help is by buying supplies and food for the Federation's emergency food pantry to serve the community via an Amazon wish list.

Food, clothes, toiletries, pet food and more will be delivered directly to the Federation.

The Federation's Jewish Family Services division is expanding its hours of the food pantry to accommodate the much greater needs of the hard-hit community.

"We're really in a good position to do all this. This is what we do, and we're pretty good at it," says Sanford. "We have a large population we serve, not only through the food pantry, but with emergency assistance to help people with bills for medications, rent and electricity."

As she notes, the Southwest Florida Jewish community may be small, but it's mighty.

Rivka Ronda Robinson believes in the power of personal stories. An author and journalist, she has a passion for writing about inspirational people, Judaism, spirituality, travel, wellness and environmental health. A member of the Authors Guild, she lives in Atlanta.