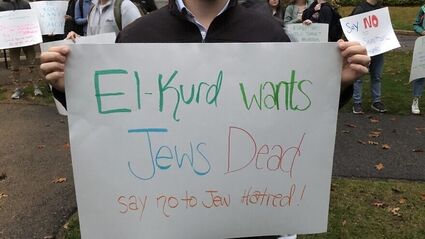 At Harvard University, a poster criticizing the campus appearance by Palestinian activist Mohammed El-Kurd, who has made a series of antisemitic comments.

(JNS) - Harvard University and the Massachusetts Institute of Technology recently hosted events with Palestinian activist Mohammed El-Kurd, who has made a series of anti-semitic comments.

El-Kurd, who appeared at MIT on Oct. 22 and Harvard on Oct. 24, has described Zionism as a "death cult," "murderous", "genocidal," and "sadistic," according to research compiled by the CAMERA media watchdog. He has also said that Israelis have "an unquenchable thirst for Palestinian blood."

More than 60 MIT students sent a protest letter to the heads of the departments responsible for inviting El-Kurd....