A Jewish cabaret artist's Egon Schiele paintings, stolen by the Nazis, will be auctioned for charity 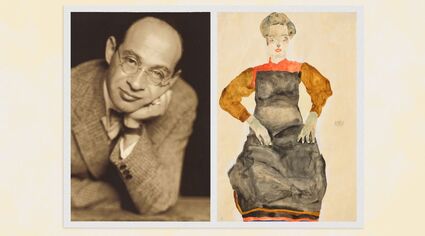 (JTA) - After a years-long battle to reacquire two paintings the Nazis stole from their ancestor before he became one of their early victims, the descendants of Austrian Jewish cabaret performer Fritz Grünbaum will auction the Egon Schiele works off at Christie's in November.

The proceeds will go to support up-and-coming performing artists from underrepresented backgrounds, starting with a student from a Washington, D.C., arts high school who will play the piano at an event celebrating the sales. The two paintings, "Woman in a Black Pinafore" and "Woman Hiding Her Face," are expected to fetch as much as $2.8 million together.

Grünbaum was said to be the inspiration for a character in the 1972 film "Cabaret" and was also a real-life collector of the works of Schiele, an Austrian expressionist artist. Grünbaum owned 81 pieces created by Schiele as part of his massive collection of artwork, which also included works by Albrecht Dürer, Auguste Rodin and Camille Pissarro.

Grünbaum performed as a master of ceremonies and wrote songs and operettas. But he was also known for his political activity: In 1910, when an Austrian officer made antisemitic remarks, Grünbaum famously slapped him and was challenged to a duel, in which he was injured. After the rise of the Nazis in the 1930s, he became a vocal critic both in his performances and in a weekly column for a Viennese daily newspaper.

In 1938, Grünbaum and his wife Elisabeth were arrested by the Nazis and he was forced to sign a document giving her power of attorney. Elisabeth was then forced to sign a paper claiming she was voluntarily turning the artwork over to the Nazis. They were both sent to Maly Trostenets concentration camp near Minsk, where Elisabeth is presumed to have died. Grünbaum was moved to Dachau concentration camp and gave his last performance at the Dachau infirmary on Dec. 31, 1940. He died of tuberculosis two weeks later.

The effort by Timothy Reif and David Frankel - the heirs and co-executors of the estates of relatives of Fritz and Elisabeth Grünbaum - to reacquire the Schiele paintings was marked by legal battles due to issues with statutes of limitations and disputed claims that the paintings were never stolen, and were instead in the custody of a relative of the Grünbaums through the war until they were sold to art collectors.

The family's efforts to retrieve their paintings broke legal ground when a New York judge issued a landmark 2018 ruling saying that the family could pursue their claims under a law passed by Congress two years earlier. That law, the Holocaust Expropriated Art Recovery Act, or HEAR Act, gives the descendants of Holocaust victims up to six years after discovering that the Nazis may have seized property belonging to their ancestors. Before the act was passed, statutes of limitations on these claims varied from state to state.

The law, and its application, is part of a complex and thorny effort to reunite the many works stolen from Jewish collectors as part of the Nazis' campaign of terror against Jews in Europe during the Holocaust. As in the United States, other countries have recently made it easier for descendants of victims to retrieve stolen works.

Last month, for example, the Wassily Kandinsky painting "View of Murnau with Church" was returned to the descendants of a Dutch Jewish art collector who was killed at Auschwitz, in a reversal of an earlier court decision that said there was not enough evidence to support the claim it had belonged to the collector. The reversal depended in part on a change to Dutch policy to stop weighing the interests of museums holding stolen works.

Reif and Frankel are continuing to pursue other paintings that they say their ancestor owned. But for now, "Woman in a Black Pinafore" and "Woman Hiding Her Face" will be made available at auction Nov. 17. Christie's says the paintings are valued between $500,000 and $800,000 and $1.5 and $2 million respectively.

Reif and Frankel will use a portion of the proceeds from the sale to establish the Grünbaum Fischer Foundation, which will support young performing artists with grants.

In a statement to Christie's ahead of the auction, Reif said, "This charitable legacy honors Fritz Grünbaum's tradition of generously supporting Jewish performers when they needed it during the darkest hours of Nazi persecution."