Retiring dentist honored by patients and vice mayor of Deltona 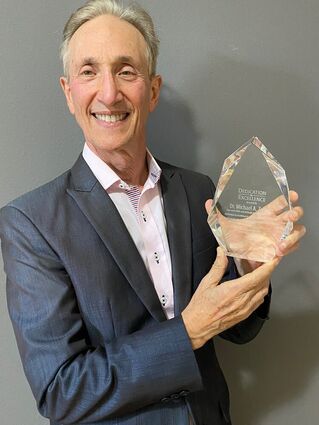 Michael Zerivitz, DDS, better known to all his patients as Dr. Z, practiced dentistry at 916 Deltona Blvd. in Deltona for 42 years - caring for up to three generations in one family.

When he decided to retire, his patients were sad to lose him. "There has been an outpouring of emotions from his patients," said his wife, Ody Arias-Zerivitz. "Many patients have sent cards, have come by the office to drop off gifts, fruits, etc. All in show of their appreciation for Dr. Z's dedication and impeccable work."

When Ody wanted to throw a retirement party for him, Dr. Z said he didn't want a party for himself, but to celebrate all his patients.

Originally scheduled for Oct. 2, the celebration was delayed because of the aftermath of Hurricane Ian and rescheduled for Nov. 2. The event was held at The Center of Deltona and even though Dr. Z wanted this to be a celebration of his patients, it was they who honored him.

Ody shared that several people expressed their admiration and affection for Dr. Z.

In particular, one of his patients, Oscar Gomez, a Search and Rescue Army Veteran who has served in four wars, gave Dr. Z his Challenge Coin, which he received after serving in Afghanistan, as a token of appreciation and respect.

"Oscar's words and generous gesture moved my husband to tears. There was not a dry eye in the room," Ody Arias said.

Steve Fieldman who is a long time friend of Dr. Z and a prominent attorney, also was among the many who spoke. 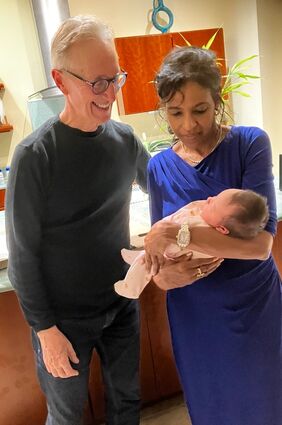 Dr. Michael and Ody Zerivitz with their newborn granddaughter.

Finally, the vice mayor of Deltona, Maritza Avila Vazquez, presented him with a Dedication to Excellence award.

"Taking just one look at Dr. Z, we can see that he is an accomplished man; professionally as well as in his personal life," Vazquez said in her speech.  "We wish Dr. Z all the best in this new chapter.  May he continue to share himself and his many talents. To Dr. Z, I say today that 'every end is an even better and greater beginning.' Never underestimate the difference that you make and all the lives that you touch, enjoy your next chapter to the max, in great health!"