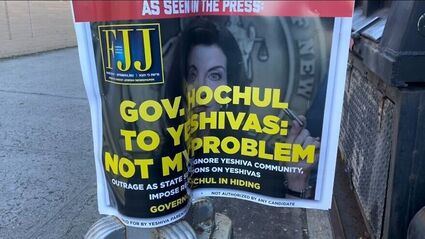 A sign in Brooklyn reads, "GOV. HOCHUL TO YESHIVAS: NOT MY PROBLEM."

(JNS) - One could circle Brooklyn's Edward R. Murrow High School for blocks on Tuesday. There were no political activists handing out campaign material. A truck with inaudible speakers passed the school's polling place once in a four-hour window. Neighborhood residents could be forgiven for not realizing an election was taking place.

Outside of the "Vote Here" signs zip-tied to the fence by the entrance to the polls, there was only one glaring reminder for this Midwood community, which is comprised largely of Haredi and modern Orthodox Jews: A sign folded around a streetlight, capturing a h...