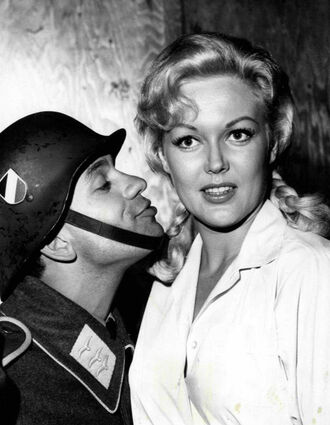 Robert Clary as Lebeau and Cynthia Lynn as Fräulein Helga from the television program "Hogan's Heroes," 1965.

(JNS) - Robert Clary, a Holocaust survivor best known as the French actor who starred in the CBS-TV series "Hogan's Heroes," died at his home in Los Angeles on Nov. 15 at age 96.

Family members did not provide a cause of death.

Cleary, who played Corporal LeBeau on the World War II-era sitcom from 1965 to 1971, was the last surviving member of the show's original principal cast.

Born Robert Max Widerman in Paris on March 1, 1926, Clary was the youngest of 14 kids born to Orthodox Jewish parents. At age 16, he and most of his family were rounded up by the French police and sent to Auschwi...